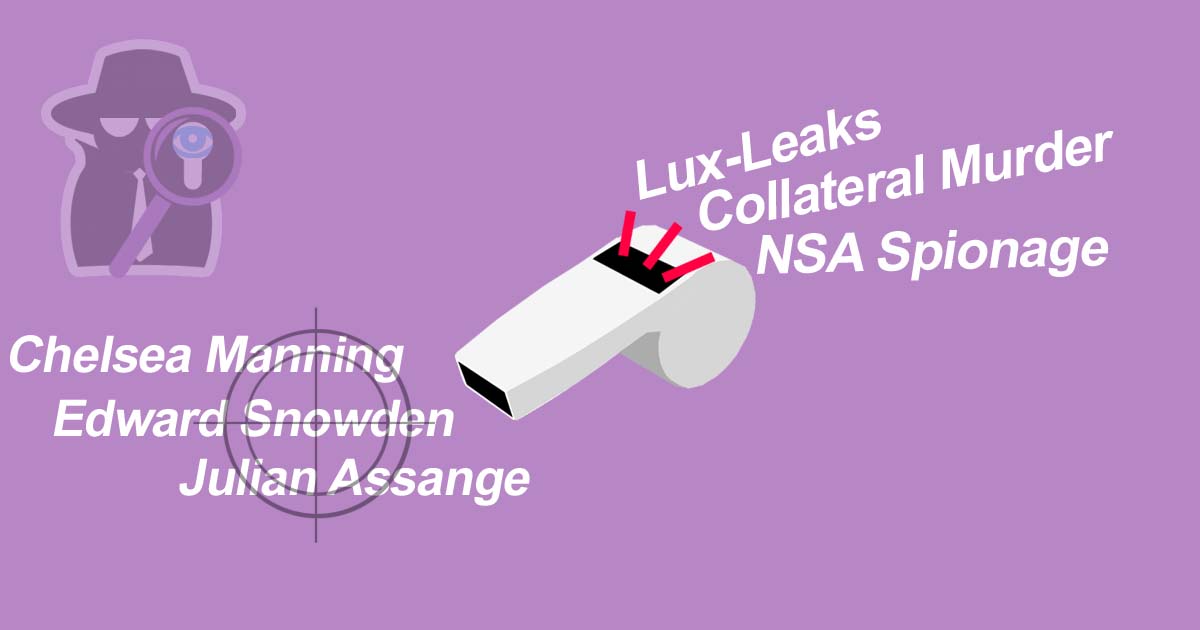 Whistleblower (indicator, revelator) is the term used to describe the secret information that is important for many people and the common good. Usually it is people who access this information via their workplace and often at great personal risk disclose these abuses. The revelations range from human rights violations, data misuse to corruption and mainly concern politicians, corporations and secret services.

In order to have the courage to reveal such machinations at all, a good portion of civic courage is needed to take these risks for the benefit of many others. Probably the most famous whistleblower Edward Snowden told the world about the massive spying out of the privacy of billions of people by the US secret service NSA with the help of his tool PRISM. No less well known are Chelsea Manning and Julian Assage (Wikileaks), who became known, among other things, for the data on war crimes such as torture or a video entitled Collateral Murder, which shows the firing of civilians by a US combat helicopter. There are enough risks for whistleblowers, because all of them are either in political asylum to escape the punishments of the US government or are already in custody.

In Europe, on the other hand, Antoine Deltour and Raphael Halet have uncovered legal infringements in the public interest, also known as Luxembourg Leaks. Through your courageous behavior, it has become known how large companies such as EON, Disney, Skype and many multinational corporations carry out large-scale tax avoidance.... supported by the politics in Luxembourg. Jean-Claude Junker, former Luxembourg Finance Minister and current President of the European Commission, is behind this tax avoidance model. Instead of changing these practices and punishing politicians, tax officials or senior executives of participating companies and management consultants (such as PricewaterhouseCoopers / PwC), whistleblowers were indicted and sentenced to suspended sentences, making them criminalised.

There are and have been a number of whistleblowers who have, in the course of history, exposed great and small grievances to defend the well-being of many. Politicians are often partly responsible for these abuses, which is why little is done by them to protect the whistleblowers. What is needed, however, is a policy that supports such heroic acts and protects these people. And it needs a society that stands by these people in times of need and appreciates the courage that these people bring to bear for all of us, regardless of the consequences for themselves. This is the only way to create a society whose values are not corruption, war, greed, social degradation and elbow mentality.