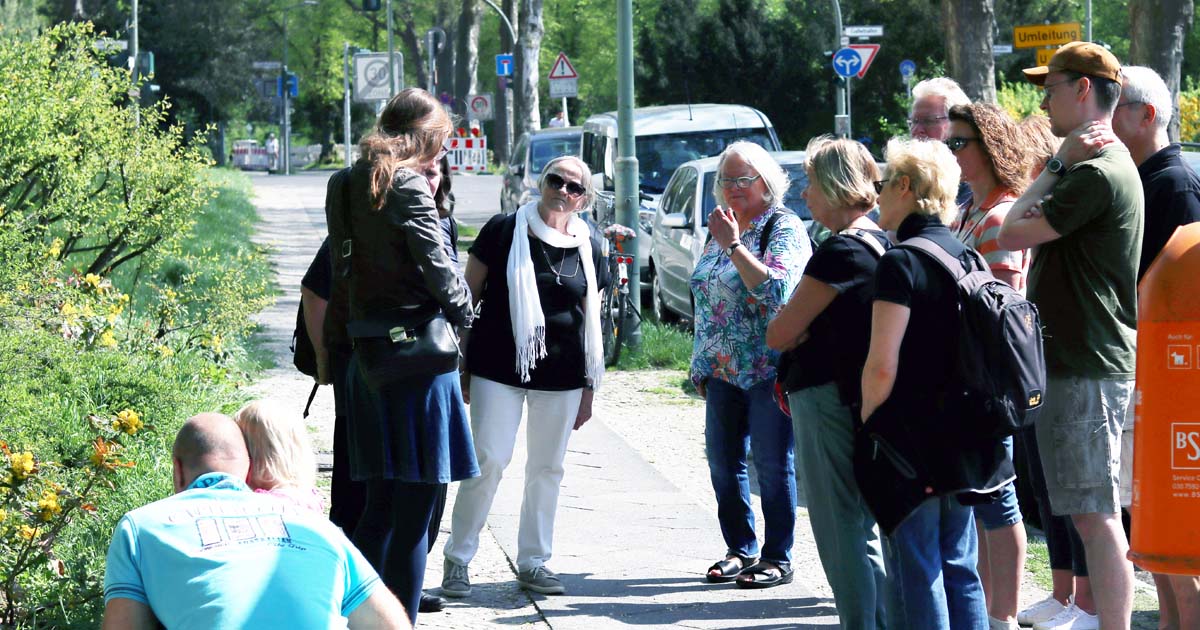 This year we again offered a wild beekeeping in Lankwitz for neighbours, in order to bring them closer to the insects, here the wild bees and very concretely the tawny mining bee. Today was the day, and with 12 interested neighbours we visited the exceptionally large colony of the tawny mining bee (Andrena fulva), a solitary wild bee species.

As early as 2017 we tried to organize a guided tour in the neighborhood, but this was ruined by an early spring and hatching and then 3 weeks of rainy weather. Pure nature. This year we were lucky (and of course we learned something and offered several dates :-), the weather was fantastic, as were the bees and our interested neighbours anyway.

Shortly after 12 o'clock we start, enough time to leave the breakfast coma behind and the midday hunger or the midday heat in front of us. After a short introduction to us and Your Little Planet! we started into the planned "30 - 60 minutes guided tour (depending on your questions)".

After a short introduction to the systematics, social behaviour and nesting methods of the bees, the differences between the honey bee and the other 580 bee species in Germany and the life cycle of the tawny mining bee, we started with the more practical part of finding the nests and observing them. However, one did not have to run much for it, because all nose long holes (nest entrances) of the diligent tawny mining bees were found on the lawn surfaces. 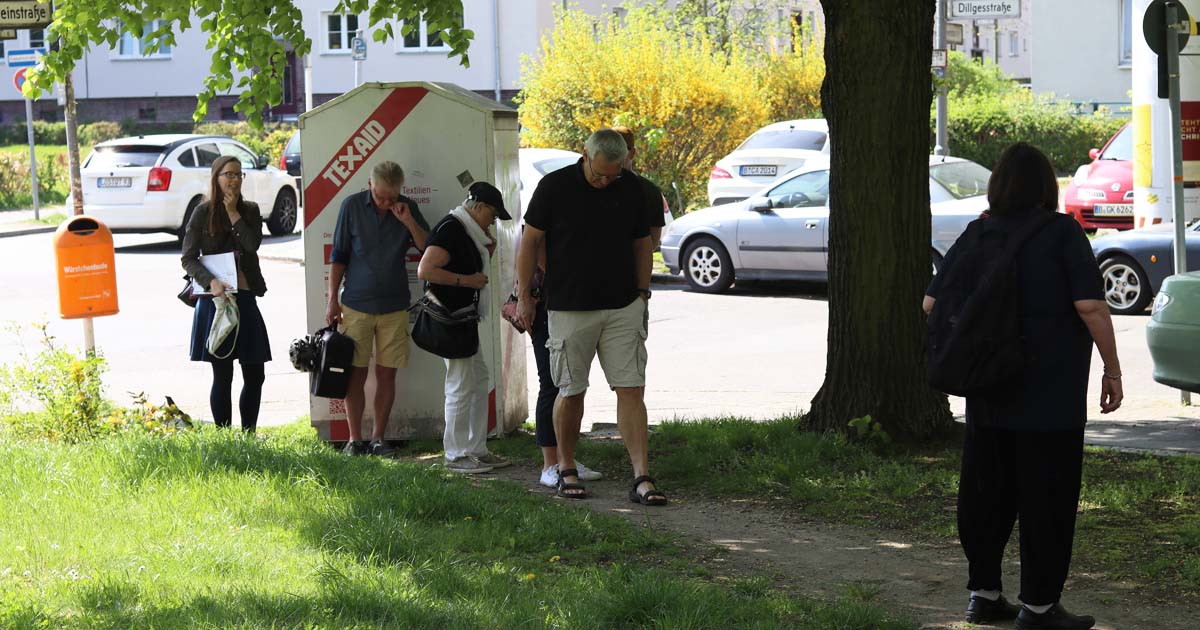 Apparently the season was a bit shorter this time, because already now you had to take a closer look to be able to watch one or the other tawny mining bee. Quite the opposite to the activity when the first bees were born this year. 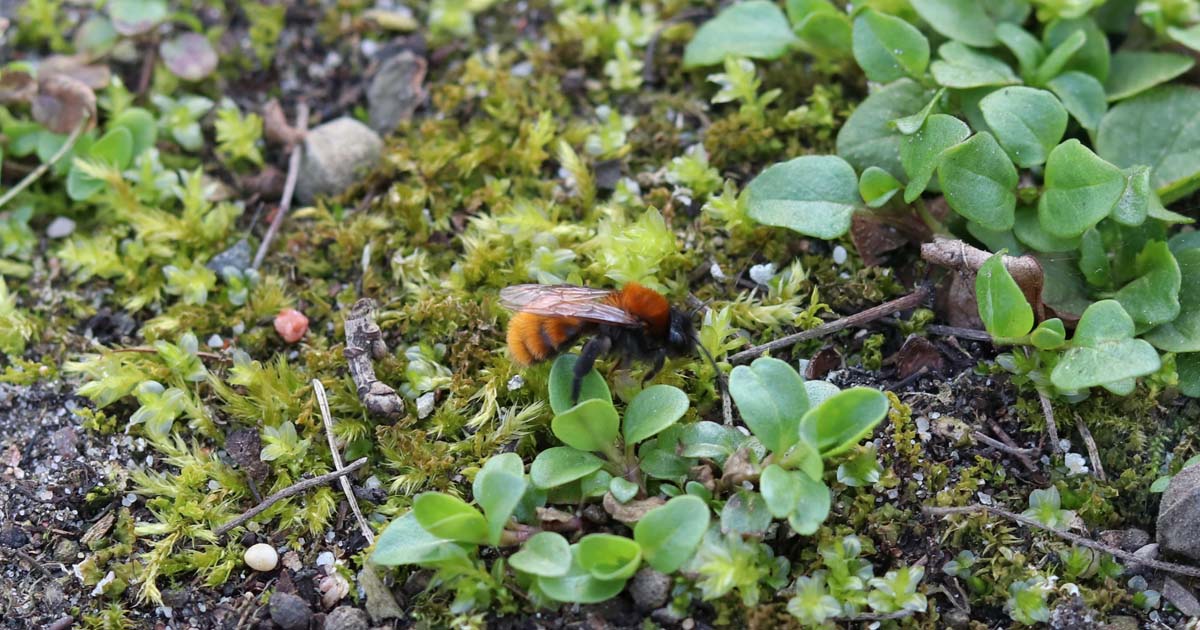 But especially the nests you could still see very nice. And the "Berliner Pflaster", the mosaic and cobblestone-like sidewalks, offer very good nesting possibilities due to the many sandy interspaces, which is why you will always find something there. 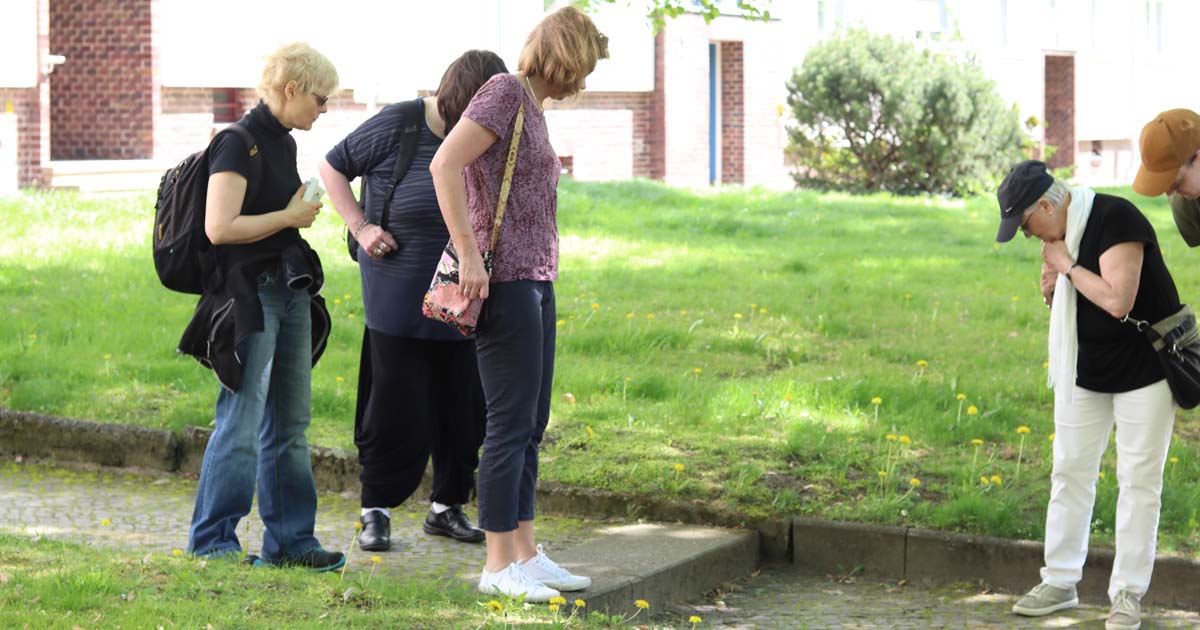 In between there were a lot of questions about the activity of the bees, the nesting behaviour or also the differences to other species, which is why there were small pauses with answers to these questions every now and then. Above all, we wanted to point out the parasites, which are specialized in sand bees. The wasp bee N. signata is specialized in the fox red sand bee, that is it parasitizes only this species and flies in the area of the sand bee nests and looks for a nest on the basis of smells, in which there is no female sand bee. 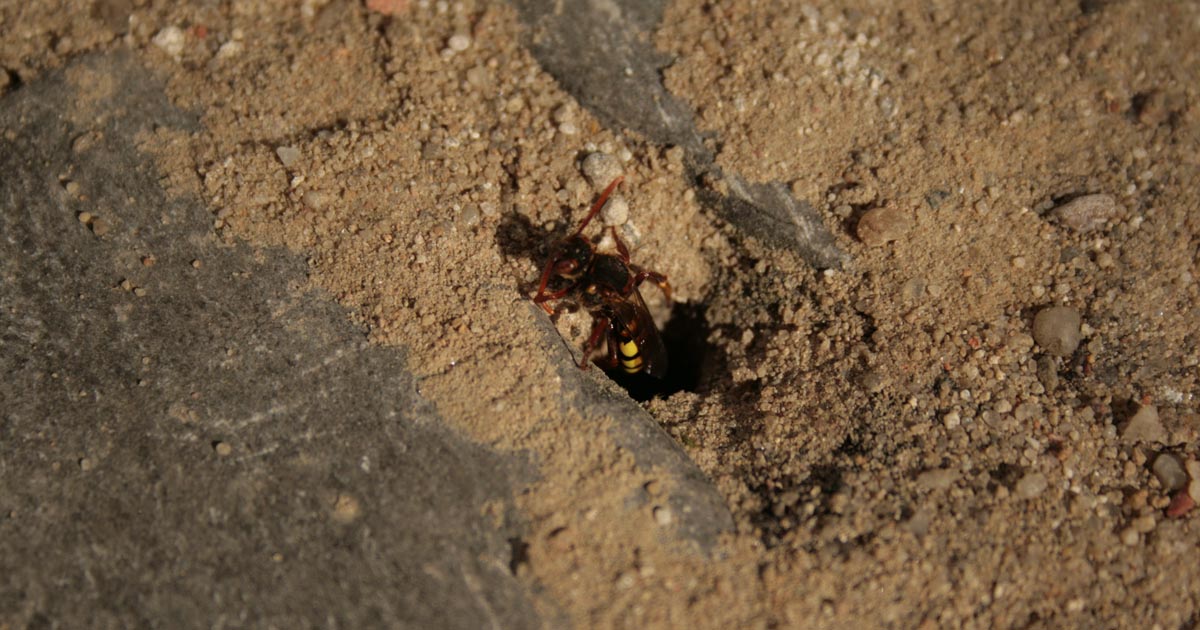 The wasp bee then enters the nest and lays its eggs in the brood cells of the sand bee nest and injures or kills the host larvae. The fly, the Big Wool Hover, we couldn't see. 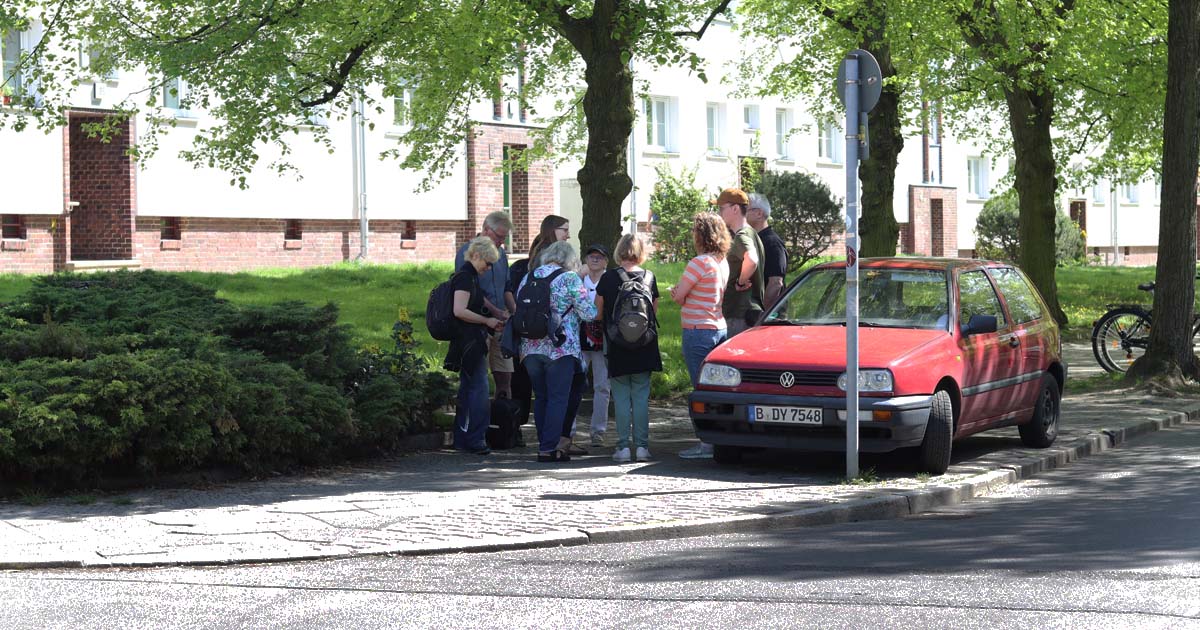 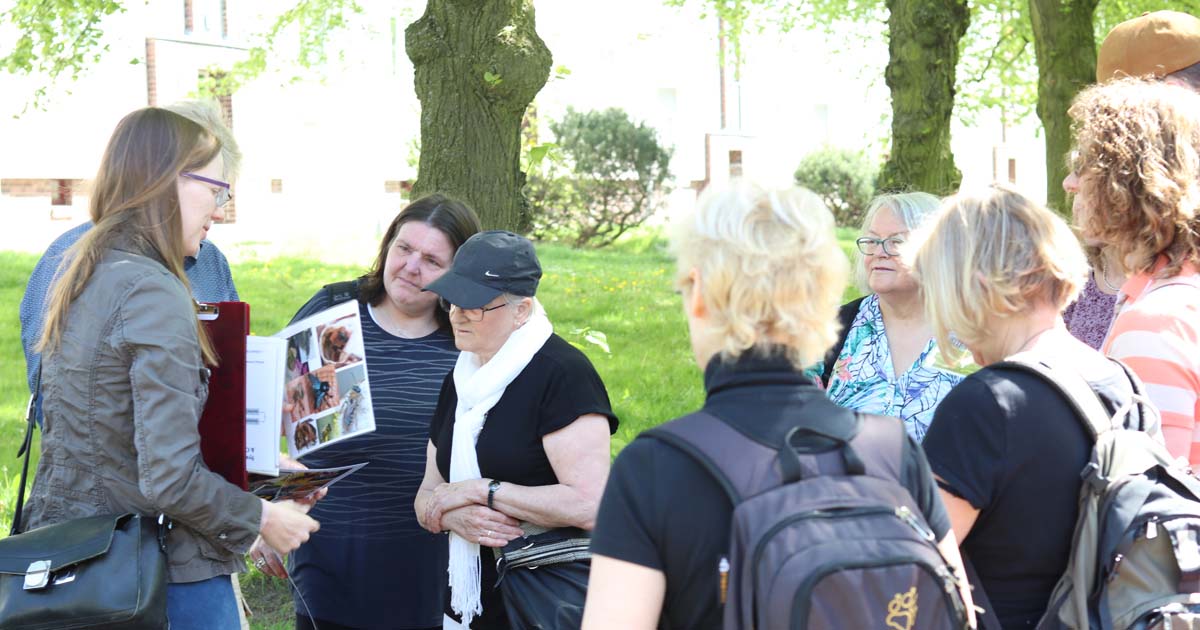 At the end there was a small (in the truest sense of the word) surprise. Since two of the smallest bee species (furrow bees) have settled in the vicinity, we made a short trip there. The about 1 cm tall redlegged furrow bee (Halictus rubicundus). We could also observe the 0.5 cm high furrow bee Lasioglossum X...Y as well as a blood bee, a cuckoo bee like the wasp bees, going into a nest of furrow bees. 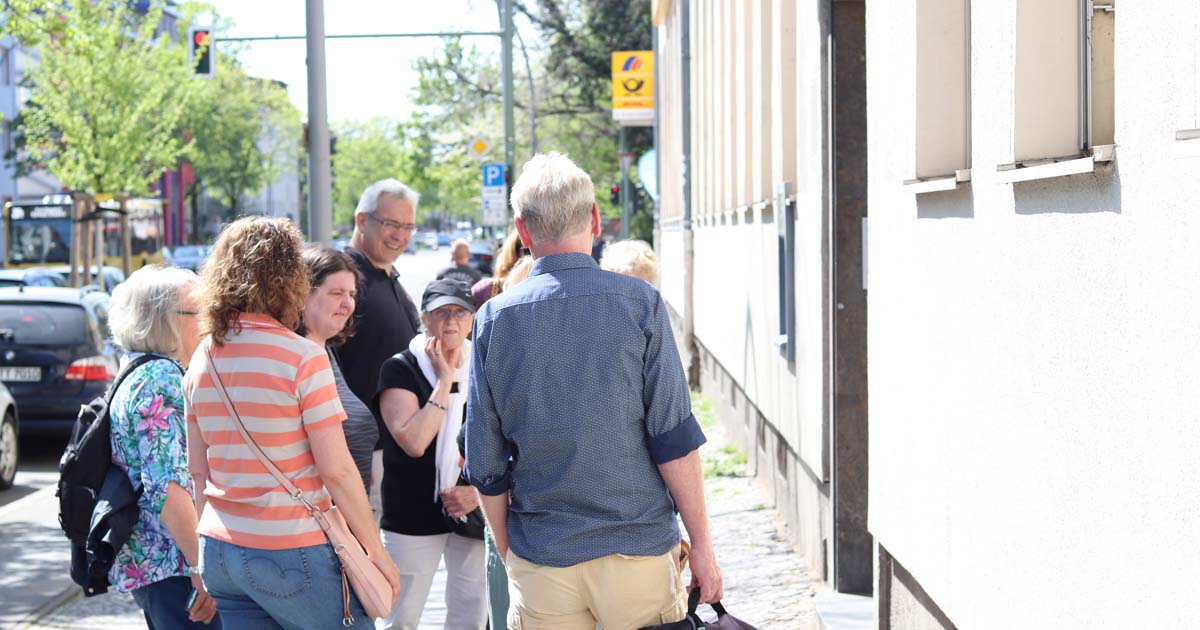 When we looked at the clock there were two hours around. We had underestimated the enormous thirst for knowledge of our participants and massively exceeded the time. No problem for us because we had a lot of fun with the thing and with these dear people. We hope to have found one or the other ambassador for the endangered insects who will walk in the future through the streets of Berlin with a more alert eye for the little miracles.